Baltimore, April 5, 2018 – From the April issue of Dome, A Publication for the Johns Hopkins Medicine Family 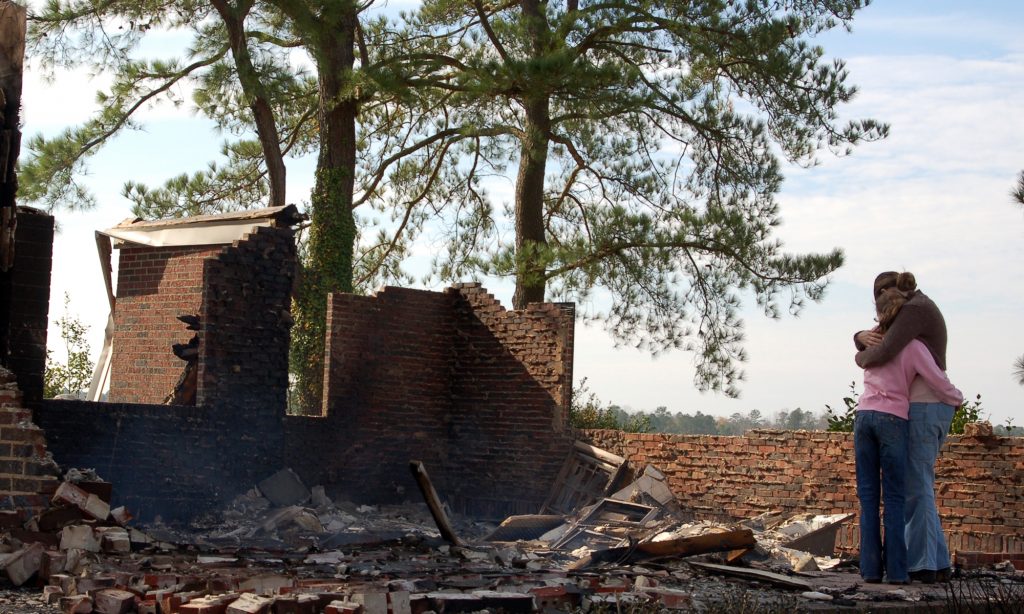 The Power of Psychological First Aid

To understand the mental toll of a disaster, psychologist George S. Everly Jr. asks his audience to consider the behavior of a middle-aged woman in a video clip. Looking dazed and distraught, she’s wandering away from what’s left of her Florida home after it was demolished by a storm. Clutching stacks of family photos, she doesn’t appear to be physically harmed. But she’s clearly traumatized.

“What do you say to her? What do you do?” the school of public health and school of medicine faculty member asks the attendees at his two-day training workshop on psychological first aid held in March at the school of nursing.

“Do you say, ‘What’s your name?’” suggests one participant.

“Hug her?” asks another.

“What you should say is something like this: ‘My name is George; I’m from the disaster response team. What’s your name? And, by the way, where are you going?’”

Everly tells the group that aimless wandering at a disaster scene is common and often indicates a need for psychological first aid (PFA).

He is a pioneer in the field of psychological crisis intervention and human resilience. As co-founder and chairman emeritus of the International Critical Incident Stress Foundation, a United Nations-affiliated organization, Everly has worked with government leaders around the globe.

The Florida case was one of many he shared, along with a series of role-playing exercises, during the workshop attended by both Johns Hopkins employees and people from organizations across the country (The next PFA training session at Johns Hopkins is scheduled for May 3 and 4. The Department of International Health at the Bloomberg School of Public Health is a co-sponsor of the workshops.)

Co-author of the recently published book The Johns Hopkins Guide to Psychological First Aid, Everly provides in-person training as well as group workshops throughout the world. An introductory online course has been taken by nearly 50,000 people worldwide.

Because everyone is a potential witness to catastrophe, Everly wants as many people as possible to learn a skill he says can figuratively “stop the bleeding”—at least temporarily—and help those who are suffering build resilience.

“There aren’t nearly enough mental health professionals to meet the urgent emotional needs when a hurricane wipes out neighborhoods or a gunman opens fire at a dance club, movie theater or school,” he points out.

His method of delivering psychological first aid draws from more than 40 years of research and experience with survivors of natural disasters, terrorist attacks and other catastrophes. Everly provided psychological assistance in the aftermath of the Three Mile Island nuclear accident and did the same for law enforcement personnel in New York City after 9/11.

Last year in Texas, he helped residents whose communities were devastated by massive floods. Over the years, he has also traveled to 36 countries to provide support.

While at the Johns Hopkins Center for Public Health Preparedness, Everly developed a research-based intervention known as RAPID (Reflective Listening, Assessment, Prioritization, Intervention and Disposition). It begins with attentive listening, without judgment.

At the March workshop, he explained how he used this approach to assist a woman in a flood-destroyed area of Texas. First, he listened as she told him the details about the exhausting struggle to help eight members of her family.

Then he asked her what it was that she needed.

“I listened as she expressed anger, fear and grief. Rather than try to ‘cure’ her of her concerns, I was able to normalize her reactions and help her develop a plan as to how she might take better care of herself, so she could take care of those she loved,” Everly said.

In a videotaped interaction, he interviewed a young lifeguard who failed to save a swimmer in distress. Haunted by the experience—“Someone died because of me”—she reports waking up at 3 a.m. with feelings of guilt.

Using a crisis intervention tool known as “cognitive reframing,” the psychologist reminds her that the ocean is a dangerous place, and that it’s impossible to eliminate all risk. He asks if she’s 100 percent sure that the outcome would have changed had she gotten to the victim sooner.

“The goal of a lifeguard is to reduce risk, not guarantee safety,” Everly reinforces. Later in the video he makes a follow-up visit to see how she was doing.

Because mass shootings, hurricanes, fires, collapsed bridges and other traumas will continue to occur, he says that any trained responder or bystander may have an opportunity to help deliver psychological first aid. The RAPID strategies can also prove useful during major personal challenges such as divorce, loss of a job or the death of a loved one.

Workshop participant Nancy Winslow now feels better prepared to help out in such situations. The clinical customer service representative at Johns Hopkins Hospital’s neonatal intensive care unit says that when parents of preemies are going through a difficult time, she refers them to a social worker. “But I didn’t know there was a formula for helping people in a crisis,” she says. “It’s always good to have a blueprint.” Winslow says she also plans to apply what she’s learned to her work as a church pastor.

For senior neuroscience research specialist Hong Wang, Everly’s stories and role-playing exercises were especially helpful. “I learned how to listen to people, how to be available to them—and to always strive to get better at it,” she says.

Everly notes that with enough practice, “anyone can provide comfort and help people bounce back.” He cautions, however, that what not to say is as important to know as what provides reassurance (see sidebar).

When people ask him whether resilience is something you’re born with, or if it’s learned, the psychologist responds, “The answer is yes. Some people are inherently vulnerable. Others are more resilient. But no matter where they stand emotionally, we can guide people who are suffering onto the right path. Psychological first aid is one important step.”

Learn more about the RAPID model here.  And register for the upcoming RAPID workshop on May 3 & 4.